I saw a bio of each of the contestants, one is from Oxford (same as me). His claim to fame ... he was an extra in Saving Private Ryan.

Extremely Fluffy Fluffy ThingMember VIP10 yearsModerator
But the best thing is being able to sit here all high and mighty and point and laugh at them all.

monkey13Member
Reference:
But the best thing is being able to sit here all high and mighty and point and laugh at them all.

I love the way Lord Sugar brings em down to earth with a bump.

KaffsMember 10 years
Reference:
But the best thing is being able to sit here all high and mighty and point and laugh at them all
Indeed it is!    I love it!

darloboy (Play The Game!)Member
Love The Apprentice, all the twist and turns plus learning about business then the claSsh of ego and personalities plus of course Lord Sugar, Nick and Karren

Smarting ButtocksMember
i will miss Margaret.

LoriAdministrator 10 yearsModerator
I've stickied (can you believe that's even a verb?

) this topic for you.

I hope to watch this on Youtube after it's aired, so if you don't mind I shall post my comments as and when I finish watching them Over the weekend I watched the interview between Piers Morgan and Lord Sugar, he is soooo different in real life to his personna on The Apprentice. His wife says she hates that programme and how he comes across as it's not the person she knows. I believe her after watching the interview, so yet more hype probably just for tv, but I'll still watch lol.

El LoroMember VIP10 yearsModerator
I posted this over in the Apprentice forum last week:

But read this from last week's BBC news about the above Christopher Farrell.As the series was filmed some time ago, it is too late for the BBC to do anything about the series. 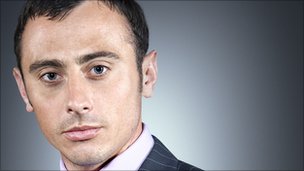 Christopher Farrell did not tell producers about his court case, it has been claimed

One of the contestants in BBC business talent show The Apprentice is on bail over a fraud allegation.

Mortgage broker Christopher Farrell, 29, from King's Tamerton in Plymouth, was arrested on 4 August in the city.

It has also emerged that the former Royal Marine was convicted in September 2009 for having a baton and a knuckleduster in his car.

The show's producers said a criminal records check in late August 2009 had revealed nothing of the case.

The weapons were found by police officers during a search of Mr Farrell's car in Plymouth.

He admitted two charges of possessing an offensive weapon and was given a conditional discharge and ordered to pay £847 costs at Plymouth Crown Court.

Devon and Cornwall Police confirmed that Mr Farrell was on bail until 27 October after being arrested on suspicion of fraud, but declined to comment further.
'Killer instinct'

Mr Farrell, who is due to appear in the new series of The Apprentice next week, says on the BBC show's website that he is not afraid to give people a "kick up the backside".

He adds: "I've been to the other side of things where friends lose legs, lose limbs, so I know I'm lucky to be where I am.

"I was a sniper in the Royal Marines and I take that killer instinct across into business."

Talkback Thames, which makes The Apprentice for the BBC, said it had received a police disclosure certificate on 16 August 2009 which confirmed that Mr Farrell had no previous criminal convictions or cautions.

Mr Farrell also did not tell Talkback Thames about the weapons conviction, which happened days before filming of the new series started on 10 September.

A spokesman said: "At no point during filming were the production company aware of Mr Farrell's conviction."

A BBC spokesman said: "TalkbackThames' selection process is in line with the BBC's policy to make appropriate checks on all contributors and contestants.

"The series will be broadcast from next week as planned."

The sixth series of The Apprentice was filmed last autumn and due to be screened in spring, but was delayed due to the general election.

At the time, Labour peer Lord Sugar was serving as business tsar in the government.

KaffsMember 10 years
Reference:
the interview between Piers Morgan and Lord Sugar
I recorded this YR - worth watching then?

I'm all excited about tonight's show.    One of my favourite programmes!

Really looking forward to the show tonight ..... I wonder if anyone still has their berets


I recorded this YR - worth watching then?
Well hubby fell asleep halfway through it but I enjoyed it lol. Some of the filming was done in his Florida home and surroundings which I enjoyed seeing. He was also filmed in the area he lived as a child and the school he went to so you get to hear what his early life was like. Hope you enjoy it

RexiMember 10 years
Reference: Hoochie
I wonder if anyone still has their berets
*blows dust off beret*

Free to Sugarettes! for a small tiny administration fee

Put me down for one of those hoochie

MrMincePieMember
Good evening all... or am I alone?

Starfleet Admiral hoochieMember 10 years
Reference:
Put me down for one of those hoochie

Am just googling to find an interesting sea bream recipe ... will be back for 9 pm.

Unless you know of a good recipe?

RexiMember 10 years
Reference:
I don't have many size 0's left
doncha you just love the internet