Here's the place to post all your weird, wonderful ... and wacky stuff from around the web.

Donkey pops up out of manhole in Switzerland

The creature has remained silent about his motives

A donkey popped up out of a manhole in Switzerland – and the beast has so far been unwilling or unable to offer investigators any leads on what he was doing down there.

Local man Urs Meyer found the big-eared creature with his head poking out of the manhole cover while walking his dog in the municipality of Pratteln in northern Switzerland.

Meyer manfully fought back the urge to make any pun on the words ‘ass’ and ‘hole’.

Meyer said, ‘My initial reaction was it was a stuffed toy but then I saw it move its ears and shake its head, and realised it was real. I don’t know how the manhole cover ended up being moved but the donkey had clearly fallen inside and was stuck there.’

It took more than an hour to dislodge the donkey from the hole.

Fire brigade spokesman Markus Osterhagen said: ‘The donkey was lucky it didn’t end up falling any deeper into the hole. It was hard enough to get it out as it was. We reckon it probably been there all night, and although it had some small cuts from trying to wriggle free, it was otherwise unhurt.’

"the beast has so far been unwilling or unable to offer investigators any leads on what he was doing down there." When I win the lottery my friend that will change.

I'm packing you off to Venice

Perhaps my favourite clip from You Tube

(no dogs were  harmed in the posting of this clip)

I love cats - I want them on a rainbow

A man escapes from a prison where he’s been locked up for 15 years. He breaks into a house and inside, he finds a young couple in bed. He ties him to a chair. W...hile tying the wife to the bed, the convict gets on top of her, kisses her neck, then gets up and goes into the bathroom. While he’s in there, the husband whispers over to his wife, “Listen, this guy is an escaped convict. Look at his clothes! He’s probably spent a lot of time in jail and hasn’t seen a woman in years. I saw how he kissed your neck. If he wants sex, don’t resist, don’t complain. Do whatever he tells you. Satisfy him no matter how much he nauseates you. This guy is obviously very dangerous. If he gets angry, he’ll kill us both. Be strong, honey. I love you!”

She responds: “He wasn’t kissing my neck. He was whispering in my ear. He told me that he’s gay, thinks you’re cute, and asked if we had any Vaseline. I told him it was in the bathroom. Be strong honey. I love you, too.”

Bit naughty in parts with f-bomb on occasions

But its funny too

Have you ever noticed how dinky a ducklings wings are? 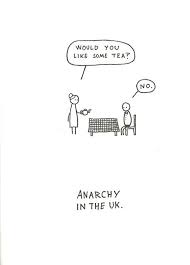 Is Treza May the most pathetic excuse for a PM ever or a national treasure if you like foreigners laughing at us?

WHO WILL WIN THE CONTEST TO BE THE MOST HATED PERSON?

All Surveys
Ben's Buddies
2 hours ago

Darnell's Springs a Coming thread (No Giraffes Allowed!)
12 hours ago

The Nature thread
12 hours ago

The History Programmes thread
13 hours ago

Back in Time for the Corner Shop
14 hours ago

*Weather update - in your area*
16 hours ago