I feel a little different Velvet, let me quote from Quentin Letts writing in The Times

"Sir Donald Wolfit, greatest of stage gammons, could scarce have milked the moment more. The tug of tragedy at the back of throat. One hand reaching forth to clutch the air, as though for oxygen itself. A lift of quivering chin, struggling for composure as John Bercow relayed the tidings, the dread news — that he, the Speaker, was finally to quit.

A country rejoices. Factory klaxons hoot. Thames barges fire their hoses in the air and dying men grin, like Anthony Quayle at the end of The Guns of Navarone. Bercow is off! Yet in the Commons, this Chamber with its instinctive feel for the national mood, MPs gasped, someone wailed “oh no!” and, though I could not see her from my eyrie, the Speaker’s chaplain was said to have sprung a leak.

Bercow himself was as watery as wet lettuce, summoning tears as he contemplated his departure. Not all this moisture came from within. At 3.35pm, a few seconds before he made his personal statement to the House, he took his drinking glass, dipped two fingers in it and sprinkled water on his eyes. The crafty little coyote.

At the 2017 election, he had promised his wife that it would be his last general election. “This is a pledge I intend to keep,” he said, as though electoral pledges were generally pretty optional. He crunched down his jaw with manly resolve and said that he would go on October 31. That won laughter. If we get both Brexit and Bercow’s departure on the same day, it could be a heck of a hangover the next morning. But Remainers are confident that they will stop Boris Johnson’s October 31 Brexit, and they realised that this activist Speaker intended his adieu to signify that he had won his battle against our EU departure.

Mrs Bercow, the demure Sally, watched from an upstairs gallery. He mentioned her and their children. He said MPs were “overwhelmingly” noble in their motivations and he talked of the Burkean idea of parliamentarians being free to ignore their electors. By now his voice was cracking.

Kleenex, Petunia! Napoleon departing for St Helena was, by comparison, a model of emotional self-control.

Then, after explaining how he would allow this House to choose the next Speaker, and how that person must stand up to the over-mighty executive, he sat down. Half the House stood to applaud. Yes, just half. On the Tory side only Ed Vaizey and Dominic Grieve, that I could see, joined in this ovation. That lopsidedness said everything about the Bercow Speakership.

Up bounced Jeremy Corbyn to make a “point of order” in celebration of Mr Bercow. Gove (doing the politic thing), Benn, Lidington, Blackford and others followed. Soon every crashing bore in the House was glooping praise over a Speaker who was now slumped in his chair, exhausted by his own magnificence. Huddersfield’s Barry Sheerman, such a windbag he should be connected to the national grid, had a go. “Bless you, Barry,” whimpered Sir John Bercow of Gaunt.

No one on their feet mentioned the awkward allegations about bias or bullying. Jim Shannon (DUP, Strangford) spoke of this notorious malcontent’s “humour, kindness and goodwill”. John Hayes (C, South Holland & the Deepings) orated about his “sensitivity and humanity”. David Lammy (Lab, Tottenham) called him “a giant” who had “stood up to the establishment”. Depends how you define establishment, perhaps.

On and on it went, Bercow nodding to these plaudits, savouring them, letting them run for more than an hour. There was a mad rant from Labour’s Dawn Butler about egalitarianism. Bercow himself flew into a tirade on the pipsqueaks of the press — at this point the guild of sketchwriters felt a warm glow of recognition — and as the session concluded he exploded against an indistinct Tory heckler.

Into the darkest times, a little sunshine must fall. That was what happened yesterday. Exit, from the cockpit of our nation’s affairs, a figure of molten bile. Alleluia."

I agree that Bercow going is not totally down to Johnson and that he (Bercow) may have milked it a bit, (but you can never be sure how these things may affect you) but reading that article it comes across (to me) as a bit of a personal view in places as opposed to just reporting the facts.

If you believe in Quentin Letts I cant help you. Total  dickhead.

I liked Bercow too Velvet

I'm not convinced about allegations about him...after all his years of doing the job they only came about recently when May wasn't managing to  bulldoze her awful deal through parliament. Where was the bullying the previous 8 years, not a whisper... I can't put the blame solely at Johnson's feet, but it definitely was a concerted effort by the Tories to oust him.

I'm actually sad to see him go, he was very fair and upheld the rules of parliament to the letter. I doubt the next one will do the same, I have a feeling there will be some jiggery pokery, but that's not unusual for the Tories.

He's got Napiolian  Syndrome no doubt.

Hope all is well Baz

He's got Napiolian  Syndrome no doubt.

Hope all is well Baz

Yes thanks Velvet ....hope you are too

I’m with you and Squiggle re Bercow.

Betty Boothroyd was a brilliant Speaker of the House.

I’m with you and Squiggle re Bercow.

Betty Boothroyd was a brilliant Speaker of the House. 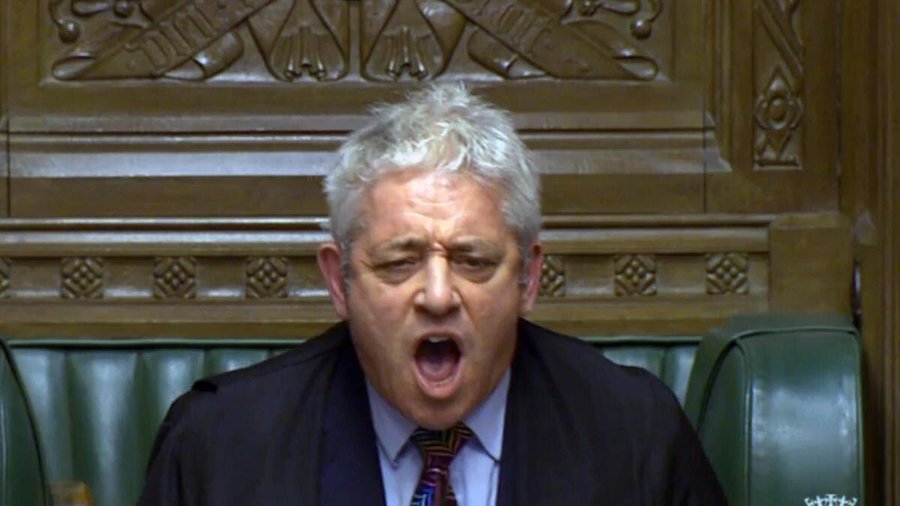 ORDERRRRRRRRRRR YOU ****WITS. QUESTIONS TO THE RIGHT HONOURABLE MEMBER THAT NOBODY CAN QUITE BELIEVE IS STILL PRIME ****ING MINISTER.

Is Treza May the most pathetic excuse for a PM ever or a national treasure if you like foreigners laughing at us?

WHO WILL WIN THE CONTEST TO BE THE MOST HATED PERSON?

All Surveys
What are you listening to right now Mk 2?
3 hours ago

Darnell's Springs a Coming thread (No Giraffes Allowed!)
5 hours ago

Escape to the Chateau DIY
8 hours ago

I know we shouldn’t panic but
8 hours ago